Please note that the following reviews are about past performances. We’re so proud of the work that we do, we just wanted to share them with you. For a schedule of current productions, please visit the “Home” tab on this website. We look forward to seeing you soon!

The Iowa Theatre Artists Company was recently honored with a grant of $750 from the Community Foundation of Northeast Iowa in support of the South Amana “Summer of Music” project.

Awarded through the Iowa County Community Foundation, the grant is responsible for underwriting the appearances of five Iowa musical groups including: The Great Bluegrass Herons, The  Riverbottom Ramblers, Castle Ridge, Straightback Chair, and Bob & Kristie Black and Banjoy.

ITAC sponsored live music each Friday evening since May 4th, 2018, as part of The Great South Amana Swap Meet and Farmers Market. This first-time event in South Amana welcomed a wide range of patrons from Iowa County, surrounding counties, neighboring states, and even visitors from as far north as Canada. Free to the public, the “Summer of Music” continued through September 15. 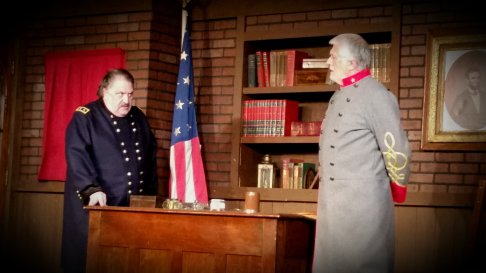 “Ben Butler” is one of the most thought-provoking, smart and surprising plays I’ve seen in a long time. And in the hands of four seasoned pros and the marvelous talent of the Iowa Theatre Artists Company, it just sings in the intimate, historic surroundings of Die Heimat Next Door Event Center in Homestead, one of the Amana Colonies. READ MORE 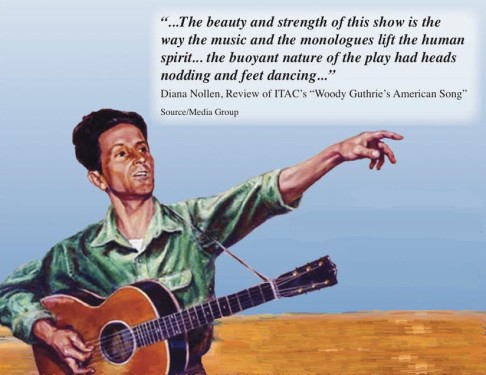 Excerpts from a review posted September 5, 2017, in Little Village Magazine:

“ITAC’s production is a reminder of the enduring power of art’s beauty in general, and folk music in particular, to create meaning out of suffering. Guthrie’s music retains a sense of the infinitely familiar, part of the bone and sinew of the great American songbook.

…this performance was a perfect blend of song and theater. Songs don’t feed the belly, but they feed the soul.

…One would be hard pressed to find flaws in the artistry of the seven members of the ensemble, and the small space of the theater worked to create a sense of intimacy.”

On the Road Again: ITAC takes its shows on the road after final performances in former Amana Barn Restaurant

The Iowa Theatre Artists Company (ITAC) is excited to announce it has sold the building it has called home for the past eight years. Co-Producers Meg Merckens and Thomas P. Johnson (both of South Amana) had been working to sell the building for two years and their wish finally came true last month. Local business owners Yana and David Cutler (Ronneburg Restaurant, The Clothes Encounter and Yana’s Clothing Shop) take ownership of the building on January 3, 2017, and will immediately begin renovations to turn the building into an Events and Wedding Center.

An ITAC Original Production, “Senior Moments,” will be the final show on stage at 4709 220th Trail on the main street of Amana, although ITAC will continue to produce in 2017 in spaces yet to be announced. “Our original plan was to be a ‘theatre without walls,’ states Johnson, “so 2017 will neatly bookend our first year as we celebrate our 10th Anniversary Season.”

Merckens adds, “We like to call it the ‘Rent and Present’ approach. As we find various places to tell our stories, we’ll make sure our regular patrons and everyone interested will know where we are and what we’re doing.”

“We are retiring from owning a building, but we still have a few stories left to tell,” Johnson adds with a smile.

ITAC entered the arts world in January 2008, performing at The Colony Village Restaurant in Little Amana and stages as far away as Iowa and Wisconsin. After performing on the road for nearly a year, the company purchased the former Amana Barn Restaurant in October 2008 and immediately began building a theatre space. That first year, Merckens, Johnson, and a group of dedicated volunteers shared Thanksgiving dinner on makeshift tables and folding chairs on a bare concrete floor in what used to be the former restaurant’s dining room.

ITAC’s first production in the new space, “The Lady With All The Answers,” opened in April 2009, followed by many more plays, musicals and concerts over the next eight years.

After announcing their “retirement” in 2014, Merckens and Johnson spent the next two years continuing to produce as they waited for the building to sell. “In many ways, it worked out even better than we expected,” Merckens says. “We continued to do some great work and perform with some of the best Iowa theatre artists in the area. How can you not love that?”

When Merckens and Johnson were approached by the Cutlers about the building in late summer 2016, the timing was just right and the co-producers knew that the Cutlers’ new business would be great for the Amanas. Johnson adds, “We know the Cutlers and what a huge impact they’ve had on the Colony in all of the years that they have lived here. We couldn’t be more thrilled to see this beautiful building used for their next exciting venture.”

A young Harvard businesswoman finds herself transplanted to the mountains of Virginia where she agrees to help a feisty 90-year-old in her rural home. Attempting to find common ground sets
off a funny, life-altering, and poignant path for both women in this heartfelt comedy featuring Deborah Kennedy and Meg Merckens.

There are so many good reasons for seeing “Grace and Glorie” by Tom Ziegler, not the least of which is the sheer pleasure of seeing Deb Kennedy and Meg Merckens in the title roles.

Merckens and Kennedy are perfection in this deeply felt, dramatic duet about two women who forge a friendship that is at times sweetly funny and hauntingly poignant.  Meeting at a difficult moment in both their lives, 90 year-old Grace and Harvard MBA Gloria laugh, learn, and grow together, in a richly wrought play that is at once truthful, unsentimental, and enchanting.

Merckens embodies Grace, a tenacious mountain woman who has never strayed more than 50 miles from her Blue Ridge Mountain home, while Kennedy is Gloria, a New Yorker through-and-through, who can’t understand Grace’s approach to life and faith.  This could have been a city-girl versus farm-girl caricature, but with a multi-layered story and nuanced dialogue in the hands of two, very talented actors who deftly peel back every layer to reveal their character’s heart and soul, “Grace and Glorie” is satisfying, entertaining, and thought-provoking theatre.

ITAC shows are known for their stagecraft and this one is no exception with sound, lighting and a set (Grace’s farmhouse) that is perfect in every detail. The show depends upon its sound, as off-stage “sound affects” propel the plot at various moments. This is all very well done and a credit to sound designer Clark Skaggs, set designer Tom Johnson, and assistant stage manager Kaitlyn Skaggs.

When director Tom Milligan introduced the play, he noted that it was a co-production of Tom Johnson, Kennedy, Merckens, and himself and said, “We wanted to see what 145 years of theatre experience could do.”  Well, it can do a great many wonderful things as we have seen over the years, including this perfect jewel of a play.

Listen to an interview with Deborah and Meg about the show on KCCK-FM by clicking here.

July 25, 2016: Meg Merckens talks about her one-woman show about the life of Erma Bombeck in two interviews with KCCK and the Iowa Theatre Blog

During the summer of 2016, Meg Merckens’ one-woman show “At Wit’s End” touched the hearts of Iowans who were fortunate to witness one of the first U.S. performances of this play featuring the life and work of Erma Bombeck. Bombeck was a wife, a mother, a prolific columnist, and a courageous defender of women’s equality. Bombeck’s books, with titles like “The Grass is Always Greener over the Septic Tank,” and “If Life is a Bowl of Cherries, What am I Doing in the Pits?,” spotlighted the life of an American wife and mom in the Sixties and Seventies. Click on the photo above to watch a video of Meg’s interview.

And if you’re curious to know how Meg got her start as an actor, listen to her in-depth interview with Eric Teeter, producer of the “Talking Theatre” podcast on the Iowa Theatre Blog. The interview starts at the 2-minute mark. Click here to listen.

When you’re done listening, here’s a little quiz for you: what sport did Meg play competitively in college?

A Great Summer Getaway Right Here at Home, A Review by Emilie Hoppe

While the glossy magazines were touting the perfect housewife in her pearls and Donna Reed “house dresses,”  Erma Bombeck’s newspaper column told the truth. The truth about raising kids, the truth about marriage, the hysterical, silly, just plain whacky truth about life in  America where husbands bring home the bacon and housewives cook it up in the pan.

“Erma Bombeck: At Wit’s End” a new play by Allison Engel and Margaret Engel makes its Midwestern debut at the Iowa Theatre Artists Co. with Meg Merckens as Erma Bombeck in a one woman tour de force that is laugh out loud funny and all too true.

Bombeck, a Dayton, Ohio, housewife with three kids, became America’s favorite syndicated columnist offering three columns a week about life in the trenches of the American home. We meet Bombeck, at home, getting her kids ready for school. She talks about  her life, her career and what it was like to be on the frontlines of the “sexual revolution” during the 1970’s when the ERA battle was taken to the streets – yours’ and mine.

This is a very, very funny play, and a smart one too, prompting me to ask myself — “Have women really made much progress since the 1960’s?” Merckens is perfect as Bombeck whose wry wit deftly, yet lovingly,  skewers suburban life where that glossy magazine image of a “housewife” (what woman is married to her house?) gaily vacuuming in her high heels is at odds with a reality that includes burnt Chef Boyardee and toilet bowl funerals for the pet goldfish. We’ve come a long way baby…. or have we?

Lest you think this show is for “ladies only” the guys in the audience appeared to love it as much as we women did. During the “talk back” after the show one gentleman remarked, “I thought this would be funny, but I was unprepared to be moved when she talked about how much she missed being a mom. . . It just made me think how much I missed being a dad now that my kids are grown. This show is about life transitions really.”

Directed by Tom Johnson, whose nifty 1960 circa ranch house set reminded me, once again, that Johnson is perhaps the best set designer in the state, bar none, Johnson revealed that because the play is really new, they rehearsed the first version only to receive a new version from the playwrights just days before the opening. “I’m proud of Meg,  how she pulls this off,” he said. Indeed she does. It’s never easy to play an icon, but to become one that folks have taken to their hearts is difficult indeed and Merckens does it beautifully.  This is one of her very best performances and that’s saying a great deal.

June 9, 2016: Podcast interview with the producers of “Oma Tales”

“There’s a hunger for history right now,” says Eric Teeter, producer of the “Talking Theatre” podcast on the Iowa Theatre Blog. Check out Eric’s wonderful podcast (click here) about Amana history in our production of Oma Tales. Starting at 11min 14sec, you’ll hear a conversation with ITAC Artistic Director and Actor Meg Merckens, Co-Producer and Director Tom Johnson, and Actor Katy Karas about using storytelling to preserve our rich histories and pass them down to the next generation.